Any rule contains the following

Host WWPN is the WWPN of the host HBA port through which a SCSI command will be a sent. A WWPN is specified in the format f0:f1:f2:f3:f4:f5:f6:f7 in lower case. If no WWPN is specified then the rule implies any host WWPN

Target WWPN is the WWPN of the VTL HBA port through which a SCSI command will be received. If no target WWPN is specified then the rule implies any target WWPN.

VTL Name is the VTL instance for which the rule is applicable to. If no VTL is specified then the rule implies any configured VTL.

Drive ID is the drive id of the VTL or a medium changer for which the rule is applicable to. Each drive in a VTL is assigned a drive ID starting from 1 (See "Virtual Drives" in an individual VTL configuration page). The medium changer device has an ID 65535. An ID of 0 or if no drive ID is specified the rule is applicable for all devices in the VTL

When a SCSI command is received for a VTL device, if there a rule which matches the sending host WWPN, the incoming target WWPN, the VTL name and the exact drive ID, then that rule is given the priority. If the rule allows for access the SCSI command is processed further else the command is rejected with a SCSI Check Condition, Sense Key Illegal Request, and a ASC/ASCQ LOGICAL UNIT NOT SUPPORTED ASC/ASCQ

If there is no rule which matches the combination of host WWPN, target WWPN, VTL and drive ID, access is allowed for further processing of the SCSI command. Therefore it is necessary to first change this behavior to disallow access by default and allow access only if a rule permits. To do this In the GUI, click on "Access Management" and click on "Add Rule" in the "FC Access Rules" section. In the next page as shown in the following figure select Rule as "Disallow" and click on Submit 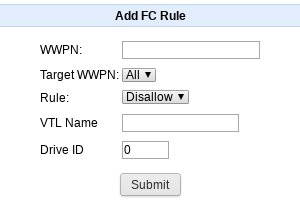 After submit a rule as seen below is added

The same rule can be added at command line as

With the above rule in place, any SCSI command received from any host WWPN and through any target WWPN for any VTL device is rejected by default. Then selectively access can be allowed based on the host WWPN, target WWPN etc.

New rules can be added or deleted from the GUI. Click on "Access Management" and scroll to the "FC Access Rules" section. To add a rule add a rule click on "Add Rule". In the form shown in the next page

Click on Submit to add the rule. Click on the delete icon to delete an existing rule

In order to identify hosts by name rather than by WWPN in a rule, an alias can be specified. To add an alias, click on "Add Host" and in the next page shown specify the WWPN of the incoming host and an alias for the host. The alias can contain only characters a-z or A-Z or 0-9

The fcconfig tool allows for controlling access to a VTL over the FC interface. Using the fcconfig tool rules can added to specify the host WWPN or GUID that can or cannot access a VDisk. Staring from 3.0.31 rules can be configured from the GUI described later in this document

To add a rule

To delete the above rule

By default all HBA ports in the VTL have both initiator-mode and target-mode enabled. To change this click on "Access Management" All WWPNs detected for the HBA ports are show as seen in the figure below

Click on "Modify" for any port whose mode needs to be changed and in the next page show select the desired mode - Target, Initiator or Dual and click on Submit to change the mode